The popularity of rifle scopes is at an all time high. This is mainly because long range shooting for sport and hunting is becoming a part of popular culture. The ability to shoot accurately at a very long distance can be an exhilarating experience and a lot of gun enthusiasts are getting rifle scopes to improve their precision over the long-range.

In order to improve your accuracy over long distances, you need to understand more about how scopes work and the different types of scopes that are available in the market. In this blog we take a detailed look on how we use scopes for a rifle and how they impact your shooting accuracy.

What is the Function of a Scope

The main purpose of a scope is to improve your visible range and magnify distant objects for easier shooting. There are different parts on the scope that work together to achieve this function.

Scopes mainly consist of various knobs and lenses set inside a tube that can be adjusted to create a magnified view of the field. The larger of the scope lenses is called the objective lens which is situated at the front of the scope. It transmits light back to the ocular lens which lies at the rear end.

Rifle scopes are designed after telescopes. Light passes through the objective lens and gets focused on a point inside the scope. The ocular lens magnifies this focus point to make distant objects appear closer.

Most rifles have multiple range settings that can be adjusted through the knobs for aiming at a variety of distances. The scope has a crosshair that helps the shooter to see exactly where the bullet will go after firing.

What Kind Of Scopes Exist?

First there is the fixed magnification rifle scope that only offers magnification for a fixed range of distance. The second type is the variable magnification scope. This type of scope has a zooming mechanism in addition to magnification, which allows you to see objects at various distance ranges.

Rifle scopes can be further classified into four types based on their function.

The discussion on rifle scopes wouldn’t be complete without mentioning the aiming sights that improve accuracy. There are two types of sights that are pretty popular these days.

The first is red dot sight, a non magnifying reflector that sends out a standard, red LED ray. Since the ray does not dissipate for a very long distance, the red dot sight makes it much easier to aim and improve accuracy.

Another, more recent innovation in gun sights is the holographic sight. This sight creates a holographic image of a red dot reticle that is recorded in three dimensional space.

Is One Scope the Same as the Other?

The short answer is no. Scopes differ in everything from range of zoom to magnification power and reticle. For instance, scout scopes can give magnification between 3x and 9x and used for moderate to high range shooting. They generally have adjustable turrets and may have a reticle or not, based on what purpose they are designed for.

The red dot scopes on the other hand offer no magnification. They are still quite popular among rifle enthusiasts and considered to be the best for AR rifles.

Some of the most popular scopes in market today include the following.

This brand has been around for a very long time. Leupold has the experience and engineering know-how to produce some of the best rifle scopes for sport shooting and hunting.

Their scopes always stand out due to the high quality of materials and glass lenses used during manufacturing. They are ideal for sports shooter competing in the .22 competitions.

One of the oldest companies in the business, Nikon has probably produced and sold more scopes than most other companies in the market. Their scopes have ultra clear view and a top notch quality.

Bushnell offers specialty scopes that are most useful for deer hunting and long range shooting. The scopes offer greater accuracy and sufficient quality to make them useful.

A relatively newcomer in the market, Vortex has quickly built a strong client base in the low-budget market. Despite their low price, the scopes are quite robust and offer great quality.

The scope’s magnification is perhaps the main factor for most gun enthusiasts who are looking to buy a rifle scope. We suggest not making the mistake that most new shooters do, going for the highest power optic. You may end up exceeding the magnification that you will actually need and pay extra for a more powerful magnification scope, something that you many not even need or use for your shooting.

Think about your intended use when buying a scope. If you generally shoot for target practice or to take part in a competition, a higher powered scope may be the better option. However, if you are planning to use your rifle for hunting or sports shooting, even a moderately powered scope with a larger field of view will do the job.

The U.S. military trains their soldiers for only using scopes with a 10x power and they can shoot guns out to 800 yards or even more. If you learn to shoot well, you won’t really need really high powered scopes to get the job done.

The rifle’s zoom allows you to adjust the distance you can see on the scope. Depending on the type of scope, a rifle’s zoom level can be either fixed or adjustable.

While it may seem odd, a lot of people prefer fixed zoom scopes to adjustable ones. This is because even a fixed zoom can be fixed with a red dot sight and allows long range accuracy.

In the world of rifle scopes, there is a large variety of standardized reticles. Some of them are registered to the company that designed them and cannot be used by another brand.

Picking the right reticle can be an overwhelming process, especially since there are so many options to choose from. Each reticle has its own pros and cons and also affected by the caliber of the gun.

Reticles start from plain crosshairs that you would find on most hunting rifles and go up to scopes that help you calculate the bullet drop specific to the type of rifle.

Can You Mount A Scope on Every Rifle?

Rifle scopes can be mounted on every type of rifle. Most modern rifles come with built in grooves and holes for screwing in mounts that work as the base for the scope.

You can even fit in scopes on older rifles by drilling holes on the top. It is best to use a professional service and takes some testing to make sure that the scope has been fit perfectly.

Why Don’t You Have a Scope on a Handgun?

Unlike rifles, handguns do not come with the space or necessity for fixing a scope. The main reason is that handguns have a very short range. The bullet cannot carry to a greater distance that would necessitate the need for an aiming aid like a rifle scope. Another reason they don’t have scope is because of the size of the weapon.

In this blog we reviewed some of the basics of rifle scopes. Do you have more questions or thoughts about scopes? Please leave a comment below! 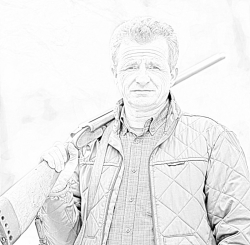 Kevin Collins
Kevin is an expert in rifle scopes and shooting. With over 25 years of experience, he know what it takes to get the perfect shot. Kevin is an avid hunter and enjoys the outdoors. He lives with his wife and two daughters and is an engineer in his professional life. He is eager to help you find the best possible rife scope for your needs.