There’s been a lot of discussions lately about the possibility that suppressors might become readily available. They are so far on the list of regulated devices by the NHPA. Due to new regulations regarding the National Hearing Protection Act those suppressors, also known as silencers, would be available for purchase by shooters and hunters

We all know that shooting a gun is loud. Indeed, so loud that a single shot without hearing protection pretty much guarantees that you’re having some sort of hearing damage.

How Loud is a Gunshot?

A typical gunshot is between 140 to 160 decibels (dB). Instant hearing damage happens for any noise over 140 dB. How loud is that? Well, if you shot a gun before you know it’s pretty loud.

Just for comparison, a jet taking off from an aircraft carrier with the afterburner on is around 130 dB when you’re 50 feet away from it. And you might think that the difference between 130 and 140 dB is not that much. Well, think again. The decibels scale is logarithmic which means that an increase of roughly 3 dB means that the noise doubles! So, going from 130 to 140 dB results in the noise getting louder by three times!

How a Suppressor helps

If you watch the movies you’d think that a suppressor reduces the noise level to just barely above the noise that a bow and arrow produce. That’s unfortunately not the case. It’s also misleading to call them silencers because unfortunately, they are not making anything really silent.

Yet, what they do is that they lower the noise level to anywhere below the magic number of 140dB. This, in turn, means that you won’t suffer instant hearing damage if you shoot your gun with no hearing protection.

It is still far away from being silent or quiet though. You’re still firing a gun and that still produces a lot of noise. How much will depend on a few factors:

How Quiet will it get?

You can expect the average noise reduction by a quality suppressor to be around 30dB. Some will only reduce by low 20’s while others will go up to 40dB reduction. Taking 30 dB as the average is a good assumption.

Looking at the gunshot ranging from 140dB to 160dB without a suppressor will reduce the noise level to somewhere around 110db to 130dB. You might think that you’re out of the woods at those noise levels.

And yes, you kind of are. At least when it comes to instant hearing damage. But what about long term damage?

You’d be surprised at where the National Institutes of Health draws the line for hearing damage to start. Take a guess.

It’s at 85dB! Even with a suppressor, you’re way over that limit if you don’t use other forms of hearing protection.

What hearing protection to use?

Once the suppressors are available, it’s certainly a great idea to use one. The less noise you expose your hearing to the better off you are.

Besides the suppressor, you still want to continue to use earmuffs or earplugs that are specifically designed for hearing protection for shooting. You’ll end up with the best protection by using electronic noise-canceling devices.

They typically let sound up to 82dB (some a little higher or lower) through so you can hear your surroundings and talk without a problem. Any sudden noise like a gunshot is instantly detected and filtered out to protect your hearing.

A good example of these kinds of devices is the 3M Peltor TEP-100 Tactical Digital Earplugs. They come with rechargeable batteries and suppress sudden noises. Yet, they are comfortable to wear and they do let surrounding sounds and voices come through.

Real-life is different from the movies. A suppressor will take the edge off the noise of a gunshot but it will not silence the shot in any way.

To be safe, you always want to use earplugs or earmuffs to prevent any damage to your hearing. Suppressors will further help to reduce any risk for your hearing so once available you should consider using them.

You only have two ears and damaging your hearing is nothing to be desired! The more you can reduce your noise exposure the better off you are. 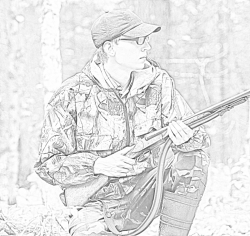 Aaron Bennett
Aaron is a passionate target shooter. He enjoys the technicalities and intricacies of long-range target shooting. Aaron has a B.S. in Mechanical Engineering and is constantly working on improving his shooting skills.